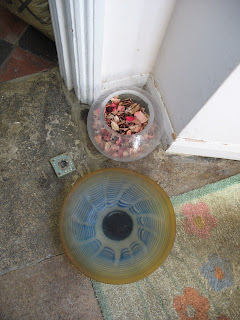 I've not posted for awhile, and maybe that's partly because I feel like a cluttery sort of person and not the sort of person who should write about decluttering as I could be a fraud.  The more I get rid of things, the more I realise how much clutter I have!

I've just read people's entries to a little test on '365 Less Things', about what you would take to go and live on a remote island - very entertaining.  It reminded me of living in France for 18 months.  I was happy buying things like basic furniture and kitchen items in Paris, and I got used to living without much stuff.  Then a kind friend brought my records over from England, and I felt partly happy (I had no TV so music was a great relaxer) and partly polluted by my past! Then I came back to England and my flat and all my 'stuff'.

Decluttering is often something that feels better once you've done it than when you are contemplating it, as it involves letting go of things.  Once you have let go you realise that you are not your things, and you are stronger than you think, being able to live with less.

Meanwhile, I have chucked out some ornamental things (see photo): hard ones, as they were gifts.  Also I have passed on some crystals that were gathering dust on my dressing table - didn't register they were clutter for ages!  And my Bach flower remedies, as I do nothing with them and their use-by date had handily expired.  Glad to have got rid of all these.
Posted by Janells at 12:06

Janells
I'm 57, live in an English village with cat and variety of lodgers - the world comes to me. I enjoy painting, reading and designing gardens.