One thing leads to another.. 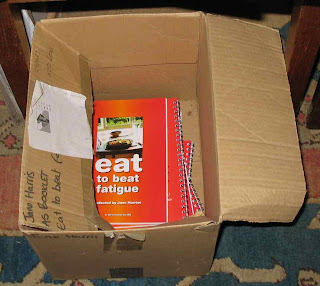 I have created another benefit from decluttering. I was getting rid of some boxes in my sitting room - one of envelopes and the other of old versions of a cookery book I wrote years ago for medical charity Action for ME.  I wrote to the charity asking if they'd promote them (hadn't promoted it for years, as there is a newer version that needs to be sold) and lo and behold, I sold 8 in 24 hours just via Paypal and the charity website!  Now have 11 sales (much frantic packaging and spreadsheeting) and 6 more yeses, so have sold all but one, which I shall keep 'just in case' (of what I do not know - may declutter later!).  So the charity will make some money and I have some space.

As Action for ME has also given a link to a newer version of the cookbook, that is also selling.  So both charity and publisher are now happy, and as I take 25% of royalties from that (though sometimes I don't bother) I am making a tiny bit of money too.

It's amazing how different things are now than when I first brought the book out, in 2004.  Now, you can instantly publicise something to thousands of people who can also instantly buy it.  In 2004 people did not use websites, Paypal or Facebook like this and I was knee-deep in cheques for weeks.

Anyway, it just shows how a bit of decluttering leads to unexpected benefits, to oneself and to people you don't even know.
Posted by Janells at 09:56 No comments:

It's ages since I have blogged about decluttering, though I have carried on the process.  A lot of it is still lingering under my 'clutter area' chair, however I'm slowly getting rid of the books which are there to charity shops, and the clothes to Air Ambulance collectors who handily leave a bag with me to put outside the door.  I've just gone through 3 magazines and have left them to go to the doctor's, and have cleared up shelves in my recipe book cupboard, a shelf of spices, and a cutlery drawer.  My sister's coming over to help with taking things away.

I'm still reading '365 Less Things', which keeps me going, and I've discovered the Happiness Project blog through 365 - which has relevant hints and is interesting in itself.  One key to happiness, according to its author, is 'an atmosphere of growth'.  I think letting go of things helps us grow and helps us get used to change too, which can be a fearsome thing.  Refreshing our surroundings helps remind us we are changing too, and helps us keep going forward.
Posted by Janells at 12:02 No comments:

Janells
I'm 57, live in an English village with cat and variety of lodgers - the world comes to me. I enjoy painting, reading and designing gardens.